The Twitter trend tables have once again become a hotbed for Nigerian music conversations and this time, it’s the deeply contrived discussion on the artiste that popularised the South African Amapiano sound in Nigeria. Well who popularised Amapiano in Nigeria, is it May D, Kiddominant or Davido? Find out in our story below.

On the 14th of September, South African DJ, DJ Maphorisa had unintentionally started off an Amapiano tussle following his response to a music fan who stated that Davido had exported the Amapiano sound from South Africa to the rest of the world. The fan also referenced Wizkid’s Bad To Me, stating that the singer had hopped on the Amapiano wave following Davido’s success with the sound, crediting Davido to being a sound pioneer that other artistes have looked up to over the years. DJ Maphorisa was however not having any of it and responded to the tweet and corrected the fan by saying his Sponono record with Kabza De Small which featured Wizkid and Burna Boy dates back to three years ago and made them the first to have them on an Amapiano record. Indeed, Sponono had been the first time the two artistes had done Amapiano and was the second out of four collaborations between the two Nigerian music greats, other music creators namely May D and Kiddominant have however laid claims on being the pioneers of Amapiano in Nigeria so in this story, we attempt to answer the question; ‘Who popularised Amapiano in Nigeria?’ by taking a look at some noteworthy releases that informed the rise of the sound in the country.

Mayorkun’s Of Lagos may not gain an entry into the group chat of Amapiano records acceptable to the South African market, but it was however released on the 13th of April with some undeniable elements of Amapiano music such as the drum pads at the very beginning, and the generally relaxed tempo backed up by airy synth. This was a novel sound to the Nigerian market blended with familiar elements from Street-Hop to Afrobeats. Produced by Fresh VDM, Of Lagos had become an instant hit and is the first known Amapiano-infused track by a mainstream Nigerian act.

KDDO, popularly known as Kiddominant had joined in the fray of the Amapiano tussle, stating that he’d started Amapiano in West Africa with his Cassper Nyovest-featured Wallet and he’d rightfully staked his claim given the fact that eWallet had been released on the 25th of June, 2020. Other than being an Amapiano pioneer, eWallet serves as a rather interesting Amapiano entry given that while the producer– Kiddominant is Nigerian, it had had a very South African feel thanks to the smooth Amapiano sound and Cassper Nyovest’s input. In fact the video had been shot in South Africa and it had predominantly felt like a song from that region while garnering some success in West Africa via TV and radio airplay.

This record may not have become wildly popular but it was notedly different as it bore some attributes of an Amapiano record from the airy feel and drum pads to the thrilling piano which had served as a bedrock for Flavour’s relaxed flow. It had also been a worthy case of localising Amapiano elements, this time with Flavour’s style of highlife music. Owned and produced by Masterkraft, Equipment was released on the 29th of June, 2020.

Cultural cross-overs have always been a thing especially on the African music scene with South African, Ghanaian and Nigerian creators featuring as frequent collaborators. Sponono was one of such records and is the very first actual Amapiano crossover with a South African producer and a mix of musicians from the origin country of the sound as well as Nigeria.

Sponono had been markedly significant to the culture as it had been Wizkid and Burna Boy’s second time on a song together and their first time on an Amapiano record. The song was released on the 25th of June, 2020 and had been a sleeper hit.

Rema’s Woman had swept the entire scene and had been notedly different from the jump with the snare and airy pads that becomes intensified at the chorus. This record after Mayorkun’s Of Lagos, was the second attempt by a Nigerian musician and producer duo to make Amapiano-infused music that had become a hit. Rema’s Woman was produced by Ozedikus and released on the 3rd of July 2020.

Popularly hailed as the Queen of Afrohouse, it was only right for Niniola to partake in the Amapiano fun and she’d promptly done that on the Sarz-produced Addicted which involves a good mix of her Afrohouse style, Amapiano’s percussive basslines and her compelling vocals. Released on the 17th of July, Addicted had been a 2020 summer hit and had reaffirmed Niniola’s position as an Afrohouse pioneer.

Currently, the term “Fuji-Piano” has become a new description for the type of music created by Neo-Fuji singer, Asake as well as Zinoleesky by music lovers on Twitter due to their blend of Afrobeats, Fuji and HipHop over Amapiano-infused sonics. Interestingly, Asake had put out a core Nigerian-Amapiano record as early as August 2020 with the hyper track, Mr Money which now seems to have been a successful test between Asake and his producer, Magic Sticks.

When Zinoleesky had dropped Kilofeshe, the streets, clubs, social media and every nook and cranny where music is appreciated had caught fire with it. It had given new life to street music and had been a full circle localisation of the Amapiano sound, as produced by Niphkeys where the elements were met full on with Fuji and Afrobeat elements to create a banger track. Kilofeshe was released on the 27th of November, 2020 and had been a huge end-of-year jam.

When it comes to elements of Amapiano music, Squander has it all, or most of it, from the loopy horns, airy pads, rolling basslines and synth cords. Further amplified by Falz’s easy flow on the beat and Niniola’s singing, the Yung Willis-produced record which was optiimsed for the Nigerian market with its fast pace, soon found favourable footing on the music scene following its release on the 4th of December, 2020.

Masterkraft had previously shown a predisposition for using horns on his Amapiano tracks and he’d blazed his way to the top of the charts with his horn-inflected Amapiano-infused street hop banger in collaboration with Bella Shmurda and Zlatan. Hallelu was released on the 11th of December 2020 and had been one of the tracks that closed out a musically-rich year.

December 2020 was heavily soundtracked by Amapiano bangers and DJ Kaywise’s Phyno-featured Highway was one of such tracks. Produced by Yung Willis, Highway made use of Amapiano’s dominant basslines, snares and synth while retaining the fast paced nature of Nigerian street hop music to make an irresistible record that was rendered mostly in Igbo by Phyno.

A clear subscriber of the “go big or go home” mantra, when Davido hopped on the Amapiano wave, he’d done so with popular South African rapper, Focalistic to create a remix to his Ke Star tune. The song had caught on like wildfire and served as a bridge for the two countries and their appreciation and love of Amapiano music, with Nigerians coming to learn Amapiano dance routines with more vigour and panache. The Ke Star remix was released on the 19th of February 2021 and was one of the biggest songs in the country as well as in South Africa.

Lojay and Sarz’s Monalisa currently has a well-received remix with American singer, Chris Brown which is evidence of the success of the original. A single off the Lojay and Sarz’s joint EP, it had started off as a sleeper hit before snowballing into a smash hit thanks to its heady and very warm Amapiano feel powered by a flute. An interesting fact is that Sarz had had the Amapiano instrumentals to Monalisa several months before Lojay hopped on the track and gave it new life. Monalisa was released with the LV N ATTN EP on the 4th of June, 2021.

DJ Tarico and Burna Boy’s Yaba Buluku remix provides a quick geography lesson on the other Swahili-speaking South African nations such as Mozambique which is the DJ’s country and sees Nigeria and Mozambique trade cultures, sonics and music talents. Interestingly, on Yaba Buluku, the two countries were not only represented by musicians but also hypemen, who hoisted the culture of their countries high by calling praise names of the singer in their languages. While it’s unconfirmed, the heaviness of the bassline and synth on Yaba Buluku may also be a result of geographical sonic differences. Whichever it is, the record which was released on the 22nd of June, became an instant hit, in Nigeria and other African countries.

No one saw a song developing from the Lagos nightlife tradition of playing Era’s Gregorian-chant-infused Ameno to celebrate bottle-buying in the clubs or the possibility of the song becoming an international smash hit but it had happened for Goya Menor with his Ameno Amapiano Remix. In fact, the song had gotten so huge, that it had kickstarted an online challenge, and had eventually run into some copyright issues which had warranted in a temporary removal. The song was released in December 2021 and showed the world the driving potential and compelling power that Amapiano music holds while making a case for its localisation by Nigerians who typically fuse the sound with Afrobeats.

In essence, while no singular artiste can take the shine for importing Amapiano down to Nigeria, it is clear that like the proverbial success story, it took a village to inspire the localisation and Nigerianisation of Amapiano, whereon the +234 had come to serve as a launching pad, helping to push the Amapiano sound to the rest of the world. 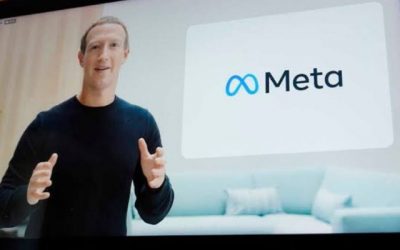 FG sues Meta for violation of the advertising laws and loss of revenue, seeks 30bn penalty

October 4, 2022 No Comments on FG sues Meta for violation of the advertising laws and loss of revenue, seeks 30bn penalty 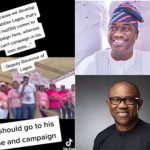 Peter Obi Should Go Back To His State And Campaign, He Is Campaigning In Lagos Because We Developed And Stabilized It- Lagos Deputy Governor, Babafemi Hamzat [Video]

October 4, 2022 No Comments on Peter Obi Should Go Back To His State And Campaign, He Is Campaigning In Lagos Because We Developed And Stabilized It- Lagos Deputy Governor, Babafemi Hamzat [Video] 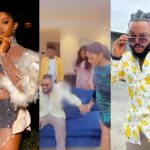 Fans speculate as Chomzy is spotted with Whitemoney on set [Video]

October 4, 2022 No Comments on Fans speculate as Chomzy is spotted with Whitemoney on set [Video] 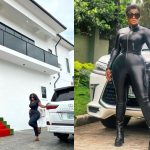 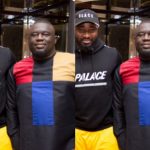 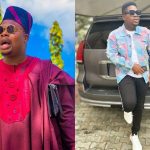 2023: How Many Of You Asking We To Leave Lagos Are Even Originally From Lagos – Mr Macaroni

October 4, 2022 No Comments on 2023: How Many Of You Asking We To Leave Lagos Are Even Originally From Lagos – Mr Macaroni 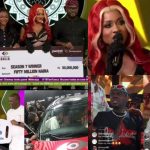 October 4, 2022 No Comments on VIDEO: Knacking Her Deeply

Do You Know That No Amount Of Money In The World Can Make Phyno To Shave His Beard? (See Why)

October 3, 2022 No Comments on Do You Know That No Amount Of Money In The World Can Make Phyno To Shave His Beard? (See Why)

#BBNaija: #Phyna Wins It All, Emerges As Winner Of The Seventh Edition Of Big Brother Naija

October 3, 2022 No Comments on #BBNaija: #Phyna Wins It All, Emerges As Winner Of The Seventh Edition Of Big Brother Naija

October 2, 2022 No Comments on Skiibii girlfriend, Dorcas Fapson accidentally uploads bedroom video meant for him on her status [photos]