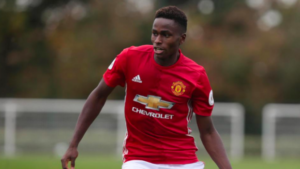 Though, we will admit that Ighalo who has been signed by Manchester United on a loan deal, is arguably the first Nigerian player to have signed to play for Manchester United senior team.
The key word there is SENIOR TEAM .

However, the degree of such accuracy on Ighalo’s case may not be as it is. Before Ighalo, United had Mathew Olosunde , Kehinde Tosin
and others.

Mathew Olosunde, who plays currently as a right-back for Rotterdam was even involved in the first team squad to play premier league matches against Tottenham Hotspur and Arsenal in may 2017. Therefore, Olosunde maybe an unused substitutes in those matches but having involved in Manchester United senior team squad made him automatically a Nigerian playing for Manchester United before Ighalo.

Kehinde Tosin, 21, joined Manchester United at the age of 13. He was there till 2018 and played largely for United Youthful side. Manchester United offered him a contact but he opted to move elsewhere for more playing time.

Tosin, the Lagos born Nigerian Midfielder currently plays for the Danish club Randers FC. Kehinde was loaned by Feirense to Randers FC in July 2019.
Tosin Kehinde is considering playing for Nigeria or England because he grew up in the United Kingdom.
Other Nigerians who played for Manchester United Youthful side are: