Fans of Nigerian musician Chinedu Okolie, better known as Flavour, have praised him in the wake of reports of a multimillion-dollar partnership with Amazon Prime.

Despite his numerous blessings, his supporters praised him for maintaining a low-key lifestyle.

According to reports, the musician received a three million dollar advance payment for his biopic on Amazon Prime.

“A Nigerian musician received $3m as advance payment for his biopic on Amazon Prime. Guess who the musician is?”.

Though he didn’t reveal the artiste name, Internet sleuths were able to do unground works and ascertain that he was referring to Flavor.

His fans were ecstatic about the good news as they hyped him for remaining booked, busy and low-key. 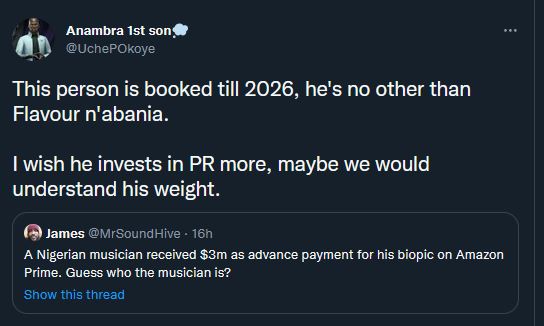